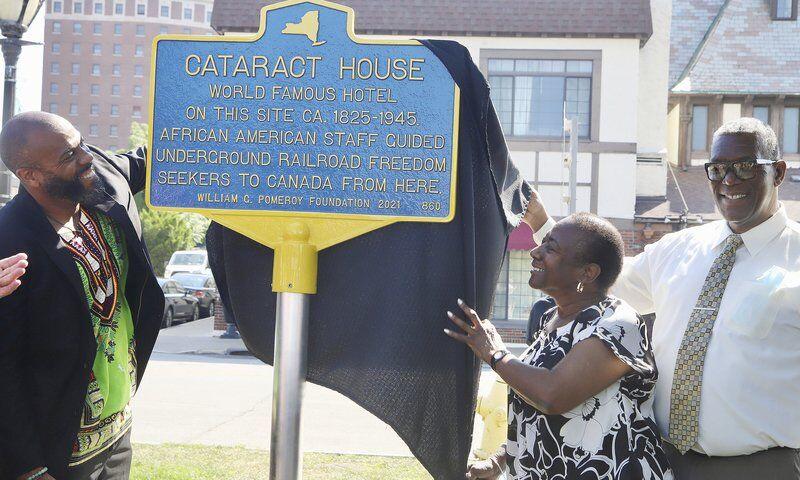 The Niagara Falls Underground Railroad Heritage Commission and the New York State Office of Parks, Recreation, and Historic Preservation proudly unveiled a historic marker designating the former site of the Cataract House at a press conference on Thursday morning at the park area across from Red Coach Inn, 2 Buffalo Ave.

“This historic marker will now designate a location that was important not only to our local heritage, but our national history as well,” said Saladin Allah, visitor experience specialist and community liaison at the Niagara Falls Underground Railroad Heritage Center, operated by the commission. “Outside of our community, people may not know much about Niagara Falls beyond the Falls themselves. This marker will help others realize the vital role our region played in the Underground Railroad and the rich history of Niagara Falls’ Black community. We hope that our representation of this site will help us continue to learn from the past so we can work toward a more just, equitable future.”

The Cataract House burned down in 1945 and was demolished in 1946. The historic marker for the former location of the hotel has been funded by a grant from the William G. Pomeroy Foundation.

Congressman Brian Higgins agreed that the marker represents an important aspect of the history of our city and country.

“The Cataract House was a pivotal station along the Underground Railroad and its story is told beautifully and poignantly through the Niagara Falls Underground Railroad Heritage Center,” he said. “This Historic Marker further shares the story of the powerful network of ‘conductors’ here in Niagara Falls who bravely helped people escape slavery along the road to freedom.”

The event was attended by several community leaders and local political officials, including Mayor Robert Restaino.

“The Cataract House is an important part of the history of our City,” Mayor Restaino said. “It continues to show the significant impact of Niagara Falls in our national story. We appreciate the work of the commission and (New York State Office of Parks, Recreation, and Historic Preservation) in designating this historic marker for the Cataract House.”

Following the unveiling, visitors were invited to walk in the footsteps of freedom seekers from the hotel site to the brink of the Niagara River.