Site of the Cataract House 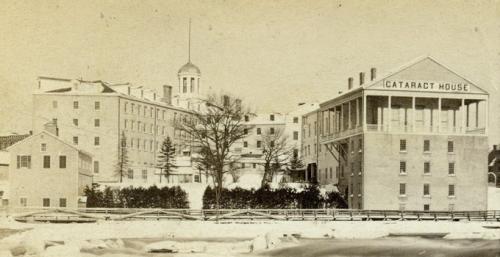 The Cataract House was one of the two largest hotels in Niagara Falls, operated by Parkhurst Whitney from 1825-45, and by his son Solon Whitney and sons-in-law James Trott and Dexter Jerauld from 1845 until the late nineteenth century. It was a magnet both for southern slave-holding tourists and for African American waiters, many of them southern-born. In 1850, more than sixty percent of African Americans working at the Cataract listed their birthplaces as a southern state or unknown/unlisted, suggesting that many of these people had escaped from slavery. The Cataract House was also the site of many escapes from slavery, and the staff of African American waiters (under head waiter John Morrison and others) helped enslaved people escape to freedom. Famous cases included a failed rescue attempt in 1847 and the successful escapes of Cecilia Jane Reynolds (1847), a woman named Martha (1853), and waiter Patrick Sneed (1853). The importance of the Cataract House as the center of Underground Railroad activism in Niagara Falls cannot be over-estimated. The African American waiters who worked as Underground Railroad agents made this site one of the most important Underground Railroad nodes in the entire nation. at this location. John Morrison, head waiter at the Cataract House, often ferried people across the river himself.